What are Light Helium Hotspots and Data Only Hotspots? 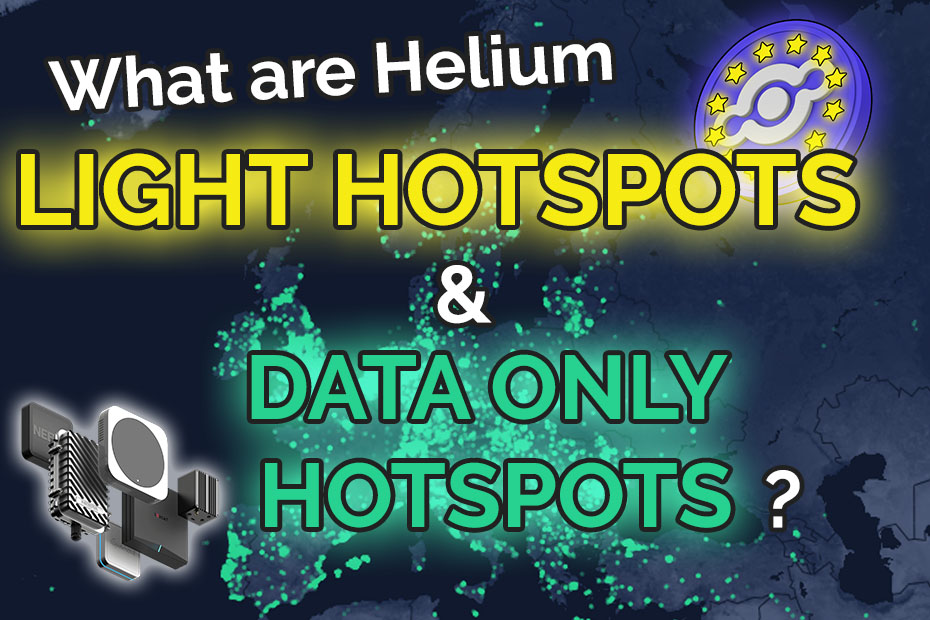 If you aren’t tech-savvy, the concepts of Light Helium Hotspots and Data Only Hotspots utilized by the Helium network might seem puzzling at first glance. But don’t worry, our guide will walk you through what it is, how it is used, and also the implementation roadmap for the same.

In a world that is swiftly transitioning to decentralization, whether tech or finance, technologies such as the Helium network are helping devices connect wirelessly through the internet anywhere in the world. Utilizing blockchain and LongFi aims to replace the old practice of using expensive cellular plans and multiple bandwidth connections with a solution where users have complete ownership over their network.

What is a Light Helium Hotspot?

The Helium network has been growing rapidly ever since its mainnet launch in July 2019. It initially started by using Full Hotspots to beacon, create challenges, witness other hotspots and store a copy of the blockchain. As the blockchain grew, each hotspot running a full node was overwhelmed by the increased load and started to fall out of sync because of the higher requirements. It created an even bigger problem with reports of many users having considerable variance in their earnings.

To overcome this problem, the Helium community voted on a solution to create an entirely new entity on the network called the “Validator.” As suggested by its name, it validates the receipts for all the challenges, witnesses and beacons that hotspots submit. The Validators form a block with those validated receipts and add it to the blockchain.

Validators allow the Helium network to create a “Light Hotspot.” A Light Hotspot is essentially a lightweight and more affordable version of Full Hotspots. It does not keep a copy of the blockchain as the validators handle that process, eliminating synchronization and making the hotspot significantly faster and stabler. It does not create challenges or participate in consensus groups either as it relies on Validators for the same. Most importantly, a Light Hotspot is eligible to earn $HNT just like its full counterpart. However, the earnings would be slightly less since it won’t create challenges, and there is no possibility of getting elected to a consensus group.

What is the Difference Between a Light Helium Hotspot and a Full Hotspot?

Full Hotspots are Helium network coverage providers that can participate in every potential reward activity available to hotspots to earn $HNT. Unlike a Light Helium Hotspot that uses a Validator to get information about the Helium blockchain and create challenges, a Full Hotspot can create challenges by itself and maintains a full copy of the HNT blockchain. In the future, every hotspot will be considered as a light hotspot without the extra cost incurred by supporting a local copy of the blockchain on the hotspot.

What are Data Only Hotspots?

A Data Only Hotspot will be rewarded for network data transfer rewards but not proof of coverage (PoC) rewards. These hotspots use Validators to receive information about the HNT blockchain and are responsible for forwarding data packets. Data Only Hotspots won’t be able to earn for challenges, witnesses, or beacons. They can be added to the blockchain without permission as they do not earn PoC rewards. Unlike Light Helium and Full Hotspots, a Data Only Hotspot is designed to be a single-purpose but a more affordable product that provides a LoRaWAN gateway.

The implementation roadmap for Light Helium Hotspots is divided into five milestones:

The completion of milestone 1.5 enabled Data Only Hotspots to be added to the blockchain, assert their location and be discovered on the explorer website by paying a $10 add gateway transaction fee and a $5 assert location transaction fee using the Helium wallet CLI.

After milestone 2, Data Only Hotspots were now eligible to earn $HNT tokens for forwarding network data.

Hotspots that HIP19-approved manufacturers have approved with lower computational requirements can be added to the network and participate in proof of coverage.

Hotspots on the Network that have been approved will be converted to run gateway-rs and will now depend on Validators to generate challenges and process witness receipts.

As of now, the project has completed milestone 2. The first two milestones introduced Data Only Hotspots on the Helium network, and milestone 2 made the hotspots eligible to earn $HNT for device data transfer. Right now, Milestone 3 is underway, with hardware audits expected to have commenced earlier this month. For the final two milestones, the Helium core team aims to convert the current generation of Full Hotspots to the more efficient Light Hotspots. It has an estimated target of completion by Q1 2022.

A lot of work is required to run such an extensive peer-to-peer network at optimum efficiency. Introducing validators to reduce the workload on the hotspots will help the network scale rapidly without facing any bottlenecks.

1 thought on “What are Light Helium Hotspots and Data Only Hotspots?”