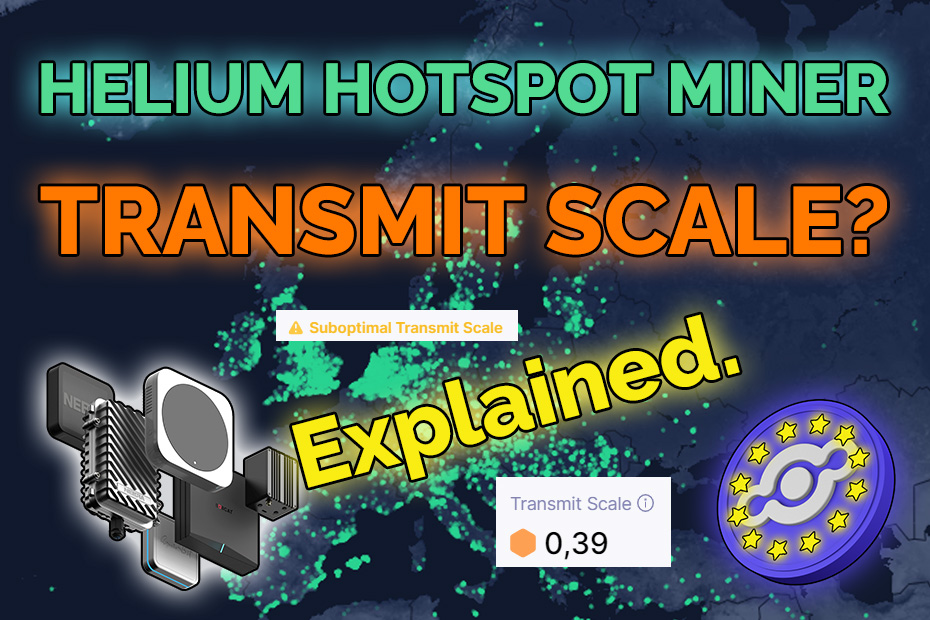 You’ve finally taken delivery of your Helium Miner, connected and set it up, ready to start mining and earning, only to notice in your Helium App that your Transmit Scale seems to be on the low side. You also noticed this text on the Helium Explorer: Suboptimal Transmit Scale. Now you’re asking yourself & good ol’ Google, “What is Transmit Scale on a Helium Miner and how to increase it?

Suppose this sounds like you; fret not. By the end of this article, you’ll know exactly what the Helium Miner’s Transmit Scale is,  the effect it has on your HNT earnings and how to increase it.

Helium Miners: What is the Transmit Scale?

We recall that the Helium network was developed with one goal: data transmission for the Internet of things. On this note, network providers earn HNT by expanding the people’s network with compatible Hotspots, also known as ‘mining’.

Other external factors directly proportional to rewards earned are the number of hotspots near you, their proximity and hotspot density.

Your Helium miner’s transmit scale, formerly known as the reward scale, measures the hotspot density assessed at various scales (resolutions). As a number assigned to each helium hotspot, the transmit scale represents how dense a hexagon is (number of hotspots present in its parent hexes) at various resolutions starting from resolution 12 to resolution 4.

This number is used to calculate the HNT reward corresponding to proof of coverage event. ‘Witnessing’ a hotspot with a low transmit scale will provide less HNT than witnessing one with a 1.0 transmit scale. The underlying motivation for implementing this system is to incentivize the spread of hotspots rather than clustering them all in urban areas.

What is my Helium Miner’s Transmit Scale?

To find your  Helium Miner’s transmit scale value, head to Helium Explorer to locate it by zooming in to hex that covers your miner’s location. Click on it, and you will see a coloured badge below your Hotspot’s name; The value next to it indicates your Helium Miner’s Transmit Scale in a range from 0.01 to 1.00.

Is a low Transmit Scale bad for my Helium Miner HNT gain?

Good news: your hotspot isn’t condemned because it has a low transmit scale!

It is important to stress that the transmit scale of your hotspot does not directly impact the amount of HNT you earn.

A transmit scale of 0.5 will not mean your miner only works at 50% capacity. But, if you witness another hotspot with a transmit scale of 0.5, you will only earn 50% of the HNT that could be gained from witnessing that specific hotspot. That hotspot is penalized in a hex with ‘too many Hotspots’.

Read on to find out how to set up your hotspot for an increased Helium Miner transmit scale or how to compensate for it.

How to increase my Helium Miner Transmit Scale?

The only way to increase your Helium Miner’s transmit scale is to move it to a location with almost no existing hotspots. On the Helium Explorer, you’ll see that Miners in hexes with no neighbours usually have a transmit scale of 1.0.

By choosing an empty hex for your miner nearby other single Miners, not only may your reward scale go up to 1.0, but you will also receive the full 100% rewards for witnessing their proof of coverage challenges, thus helping each other and the network by providing coverage in previously uncovered places.

If you don’t wish to move your miner but reach those sweet 1.0 transmit scale hotspots with your miner, consider the following options:

Suppose your hotspot is in a hidden place, outside the world in places like cabinets, basements, or behind electronics; it won’t be easy to detect the beacons of other hotspots or for other hotspots to detect yours; hence there won’t be much witnessing happening.

It’s advisable to place your antenna in wide-open, elevated places possible outdoors. Meanwhile, indoors, the highest floor window or balcony is most preferred if you live on multiple floors to pick up the beacons of hotspots farther away with higher transmit scales.

Note: If you’re placing your antenna outside, ensure it’s properly secured and protected from the elements whenever possible.

The antenna that comes with your miner is a relatively low gain (2 to 4 dBi) antenna. By upgrading the stock antenna of a Helium Miner with 6.5 or more dBi antenna and placing it outdoors, you can increase the amount of HNT it earns.

Every day you spend with a bad antenna setup means you’re missing out on the opportunity to earn HNT. Visit our trusted partner webshop Ideetron to optimize a Helium Hotspot Miner for all the required accessories. Here you can find 3, 6.5 & 10 dBi antennas with the best prices and low shipping fees.

You should now have a good grasp of what the Helium Miner’s Transmit Scale is and how it affects your HNT earnings. The Helium network is rapidly expanding as of 2021, and achieving a good transmit scale + mining setup is the best way to improve the network while earning the most HNT.

The revolutionary M2 Pro multi token miner is the most popular multi token miner in crypto space. By helping the fast growing MXC IoT network by providing coverage, you earn multiple tokens with these easy to install plug & play miners. And all that with the energy consumption of a lightbulb!

Jump into the multi token miner action today and start mining BTC, MXC, DHX and soon other coins as well.