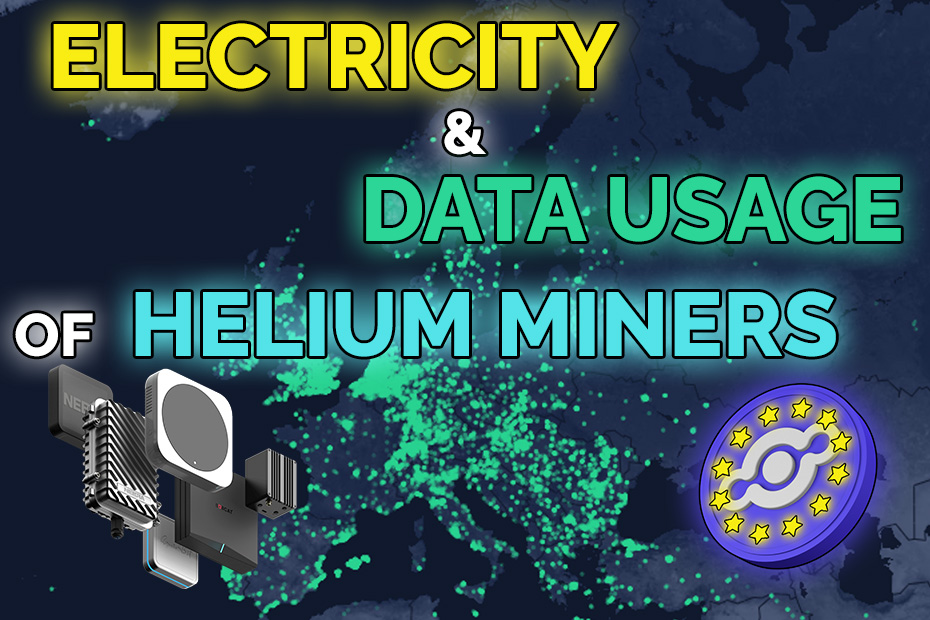 The Helium blockchain is continuing its journey to be better and more reliable with each passing day. Expanding the global network through the Hotspots is the key factor in the growth and success of the project. As with almost anything that grows, its needs increase as well. The growing popularity of Bitcoin mining went paired with a growing demand of electricity due to the high power consumption of the miners, therefore earning a reputation of being environmentally unfriendly. Is this the case with Helium Miners as well? And what about data usage? Should you be concerned with the amount of gigabytes that pass through the miner? We ran the numbers to find out.

Before we go on, did you know you can mine other coins from home as well? The M2 Pro Multi Token miner earns 3 coins at the same time! Check it out here.

How much electricity does a Helium Hotspot miner use?

For the mining of cryptocurrencies like Bitcoin or Ethereum, GPUs (also known as computer video cards) are used. Those GPUs use a lot of electricity to produce one coin of these currencies. For example, a research report from Minerdaily revealed that on average 143,000 kWh of energy is required to mine one Bitcoin. This report further detailed that the Bitcoin network uses an average of 128,248 MWh of electricity per day to mine 900 Bitcoin.

These above-mentioned statistics of energy consumption by Bitcoin are very huge. Another report from the MoneySuperMarket says that a single transaction of Bitcoin uses an average of 1,173 kWh of electricity. This is the amount of energy that can power a house for three months if the house uses 350 kWh monthly. In the UK, the average cost of electricity is 12 to 16 pence per kWh. You will have to pay a lot and the issue of carbon emission is very concerning in this.

So what about electricity usage while mining Helium (HNT)?

In contrary to mining coins like Bitcoin, there is no need for GPUs for the mining of $HNT. A simple Hotspot device with n active internet connection are enough to start the mining process. Helium Hotspot Miners only use about 5W of energy from your household so, it’s like a light LED bulb. Translated to another timescale, Helium Miners only consumes 3.6kWh of electricity monthly. I hope you see the difference here.

Radio Frequency is used to check the coverage and network connectivity of the Hotspot by the Helium Blockchain, so, mining of HNT is way more environment-friendly. Great for the environment, your conscious & wallet.

So let’s dive into the second part of a Hotspot’s diet.

How much data does a Helium Hotspot miner use?

The question that arises here, if we only need electricity and an internet connection, is how much data do Helium Hotspot Miners use? The official website of Helium indicates that Helium Hotspots use about 30-50 GB per month. If we compare this number of data usage with services such as Netflix, it’s nothing. Netflix says that a user uses about 1GB of data per hour for streaming a TV show or movie in standard definition but this increases up to 3GB of data per hour when streaming HD video.

The streaming of high-resolution videos can increase the data usage up to 7GB per hour, according to BuckeyeBroadBand.

“TLDR – we’re working on improving this, it’s an unfortunate consequence of such a massive peer-to-peer network, as every Hotspot serves blocks to every other Hotspot (and the blocks are getting bigger). once the network transitions to the light hotspot architecture in the next few months we won’t have this problem anymore”.

All of us should understand that the Helium blockchain is aiming for a greater cause and there will be problems on the way. The main thing to take from this is that they are acknowledging this issue and trying to resolve it.

In conclusion, the amount of data and electricity a Helium Hotspot miner uses is negligible, therefore not an expensive miner to run, provided you have an unlimited data plan.

The revolutionary M2 Pro multi token miner is the most popular multi token miner in crypto space. By helping the fast growing MXC IoT network by providing coverage, you earn multiple tokens with these easy to install plug & play miners. And all that with the energy consumption of a lightbulb!

Jump into the multi token miner action today and start mining BTC, MXC, DHX and soon other coins as well.